During the fall, we take orders for Lampara Bait Nets for spring delivery. We only build one or two nets each winter and fit these jobs into our other winter gear work.

We are set up to build two styles of Lampara Nets. The first, a San Diego style net is characterized by light large mesh wing web (6”x #6 thread), assembled in panels and combined with a large band of 2” stretch measure throat webbing attached to a relatively small bunt or sack. Wing web on these nets is “hung out” 100% and the hauling force is through the cork line. These design features restrict the fishing depth during both setting and hauling. Also, the 6” wing mesh is subject to damage from drop-through corks or lead lines during setting. The advantage to these nets is a smaller web pile.

The nets we prefer to build are as follows:

The hauling force is transmitted through the cork line selvage strip which allows the corks to clear the fairlead pins without damage. While the tensioned selvage strip carries the haul back force, the wing body is allowed to remain at fishing depth throughout the haul back procedure. Peterson style wings are connected directly to the bunt or sack web without a band of throat webbing. Instead, each wing terminates at the bun t with the addition of a wing “throat wedge” of the same material. This wedge, 100 meshes deep on the bunt intersection helps close the wing mesh at the very end of the set. Typically, bunt web on these nets is 7/16” x #3 thread knotless. Panels are taper cut and joined to form a hemispherical bunt. These nets tend to be slightly bulkier, but are more durable and easier for an inexperienced crew to stack.

Forty years ago, fishermen could walk into almost any fishing supply store and buy net making components out of that store’s inventory. That is not the case today. We use domestically manufactured web, ropes and twine whenever possible. Cork and lead lines come from Sampson Cordage in Washington State. Diamond Net, also in Washington, builds our wing web and selvage strips for both lead and cork lines. Everson Cordage supplies our twine. 7/16”x #3 thread knotless bunt webbing comes from overseas vendors, takes a 6-8 month lead time and is subject to minimum poundage orders over 250 pounds.

We keep some domestically manufactured materials on hand, but special web requests are slow and difficult to procure. What does this mean? Unless we have the materials on hand in our shop, please expect at least a six month wait time on a net, and then we still have to build it! The average bait net (45 fathom wings) is over 200 hours of labor. So……..don’t wait until you need to catch bait for the next fishing trip to call us.

There are a number of methods for hauling back lampara bait nets. The first and most labor intensive is by hand with a crew of four. However in this day and age, most nets are retrieved using hydraulically driven equipment. These power haulers come in three basic forms:

They require about seven GPM of oil to operate and need a dedicated hydraulic valve capable of “forward”, “reverse”, and “lock”. Mounted at least 48” above the deck, these haulers can be used to remove a twist in a wing and to back stack the second wing prior to resetting. 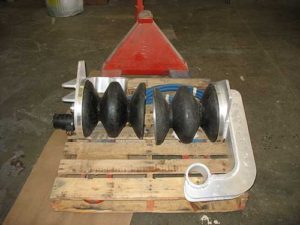 Initially, these haulers were built for Cloudburst by Nick Zardis of Kolstrand. However, upon the closing of Kolstrand, Justin Fontes of Integrity Machine Co. in Ballard (Seattle, WA) has built at least five of these haulers. You can call us for information or contact him directly. His contact information is:

Visit our Ordering page for more information on orders and shipping.